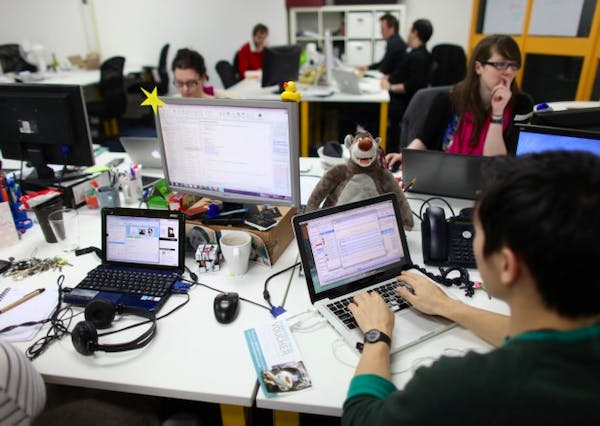 The local tech sector is growing –- and it's growing fast, according to seven tech executives speaking to about 400 attendees today at the Charleston Regional Business Journal's Power Breakfast.

The local tech sector currently employs 11,000 people and is expected add 8,000 more jobs over the next few years, said Chris Simpson, digital marketing director at Blue Ion. At the 14-person digital branding firm, every employee counts. Simpson said Charleston's quality-of-life factors do some of their recruiting for them –- like the job candidate from Nebraska who sent an email with a "Save me from the snow" subject line.

But a great city, warm weather and cool office space won't be enough to recruit 8,000 workers at the pace the jobs are being created, speakers said.

"Employees are being poached from all over and that didn't happen a few years ago. ... But instead of complaining, we can see it as very exciting," Simpson said. "It'll raise salaries, make companies compete harder and make us all ask: How do we make the region more appealing?"

For tech companies looking to recruit from other tech hubs like Seattle or San Francisco, the Charleston region needs more-affordable housing, better public transportation and a reliable bike lane system.

"Young, single, talented tech workers want to stay downtown. That's where the energy is. ... They don't want to be stuck on 26 driving in from Summerville because that's the only place they can afford to live," Simpson said.

Silicon Harbor has all the right ingredients at play to continue growing its tech sector –- such as quality of life, a clustering of tech companies and some available financing and incubators –- but more programmers, engineers and data scientists are needed.

More coding schools, an increase in engineering programs at higher education institutions and the integration of STEM subjects to students at an earlier age will all contribute to growing a tech workforce from within, speakers said.

The existing workforce partially originated from when some of the biggest current tech players gambled on putting their headquarters in Charleston in the '90s, paving the way for other startups, according to Sparc CEO Eric Bowman.

"We just hired 60 developers in 90 days," Bowman said of his software development firm, which services government and commercial sectors. "We never could have done that if it wasn't for Benefitfocus and Blackbaud. Those are the early guys who actually cut their teeth in this community. They are our tech heroes.

Stanfield Gray started Dig South, a South by Southwest-inspired annual event that hosted more than 200 speakers and around 5,000 attendees from around the country in April.

"Tech is the next economic renaissance for the Lowcountry. It's exciting that the next big idea could come out of a garage in Charleston," Gray said. "Let's prove that we can have homegrown, high-impact, scalable companies grow out of South Carolina."

John Osborne is also working to help local entrepreneurs take their viable business ideas from concept to revenue. He co-founded The Harbor Entrepreneur Center, which runs the 14-week Harbor Accelerator program that gives entrepreneurs free space in Mount Pleasant and pairs them with mentors for 14 weeks. The second cohort starts Monday.

"As a region, we need to collectively do this together. It's on us to continue to make this movement extremely real," Osborne said. "Get involved in the startup community and help us truly execute on Silicon Harbor."

Grier Allen of BoomTown talked about launching his software company with a small team in 2008. "It was probably the worst time to be starting a real estate tech company," Allen said, though the company now has 130 employees and more than 900 clients.

Allen has watched other companies grow at the same pace in recent years. Over the past decade, the region has expanded from a few startups to hundreds.

The Charleston Digital Corridor has played a huge role in that growth. The city-run, tech-focused economic development engine launched CodeCamp, which has taught nearly 500 students, and created the Flagship business incubator that house startups, many of which have now expanded into their own space.

Ernest Andrade, the corridor's executive director, is now working with the city to create a 10-acre tech district and to build the Flagship3 along Morrison Drive in downtown Charleston.

"We're going to keep doing what we've been doing, because it works," Andrade said. "The tech industry here is more than a little blip. It is here to stay and growing fast."