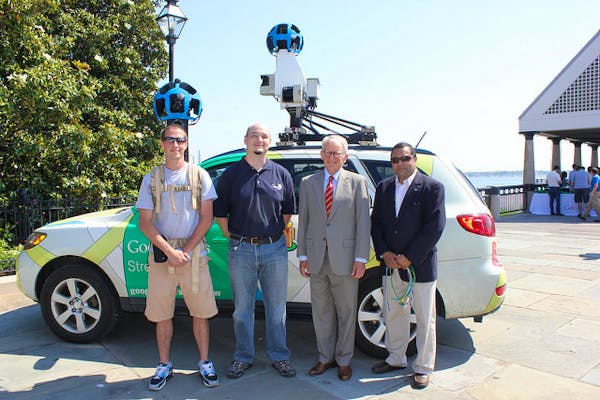 On a 73-degree day, a steady stream of people walked around Waterfront Park in downtown Charleston where, at the brink of summer, children began wetting their feet in the fountain.

Others sat scanning their smartphones while sitting on some of the benches lining the park's best view of the harbor. In a few hours' time, a few others logged on to their laptops in the park to enjoy its newest feature –- free wireless Internet access. The Wi-Fi feature is a city of Charleston venture in partnership with Google and Charleston Digital Corridor.

The free Wi-Fi was previously only available at Marion Square. The free access was turned on in Waterfront Park three days ago and already 150 people have used it, according to Ernest Andrade, CEO of the Charleston Digital Corridor.

When asked what other gathering place he'd like to see get Wi-Fi, Mayor Joe Riley said perhaps King Street, where locals and tourists roam the sidewalks daily. Andrade said the next natural move could be The Battery with the amount of foot traffic it has.

"Having this Wi-Fi network makes life easier for people doing business here," Riley said. "It's all done at no cost to the taxpayer."

Riley was joined Friday morning at the park by Andrade and Google's data center operations manager, Eric Wages, to announce the Wi-Fi expansion.

Also, Wages announced Google's expansion of its Street View trekker program, which allows Google Maps users to view places around the world online through 360-degree street-level images. In Charleston, Street View will include off-road areas that include landmarks. "The world is not just about roads," Wages said.

Street View uses a backpack with 15 different cameras that take photos every two to five seconds. Google recently tested the system in the Grand Canyon.

"It was a successful effort," Wages said.

As part of the expansion, the Street Trekker will map Waterfront Park next. Wages said it might take a few months before the images are placed on Google Maps.

About 20 students from the Charleston Charter School for Math and Science demonstrated Google's latest features under the park's pavilion. Their engineering teacher, Meredith Temples, said they were approached by the tech giant to check out the latest expansions in Charleston.

"As engineers I wanted them to see how new technology is introduced to a community," she said.