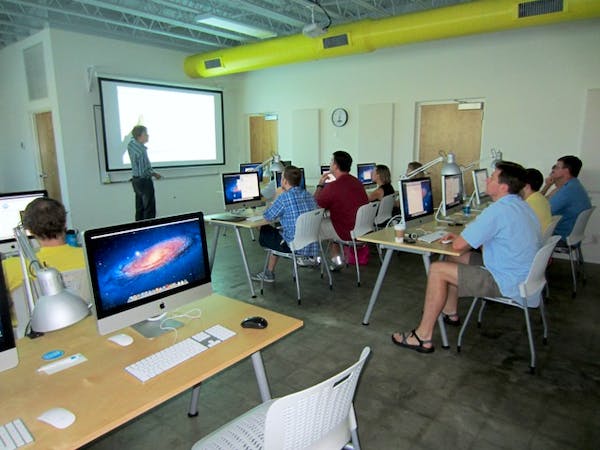 As economists lament the jobless economic recovery and our public leaders and communities scramble to find answers, most people on the street recognize that technology has made many of these jobs obsolete. They are not coming back, and we have to do something different beyond commissioning studies.

Markets typically operate very efficiently, some more than others. The most recent example of this is the growing popularity of off-line computer code schools, frequently referred to as "code schools or hacker academies." These businesses are proliferating by the hundreds to meet the high demand for workers with technical skills.

In the Charleston Digital Corridor's 2013 Annual Survey, 94% of the participating companies reported hiring staff and 88% planned to continue hiring in 2014. Hiring technical talent remains the biggest challenge for many of these businesses. To address this business challenge, in 2012 the Digital Corridor launched its own code school, CODEcamp, and staffed it with instructors from Charleston's tech community.

Code schools are rapidly becoming talent factories churning out highly employable "digital brick masons," which can impact the nation's employment rate in a positive way. While a relatively new phenomenon in the United States, market-oriented technical education has been in full bloom in Europe and Asia.

In India, NIIT is an example of just one business that has been offering certificate programs to aspiring engineers and programmers with a phenomenal success of student placement.

The explosion of Web technologies has caused the supply-demand equation for coding talent to be misaligned for quite some time, and demand is accelerating. Nationally, the business need for coding talent is highly competitive in an industry where wage levels are consistently meeting and exceeding the rising cost of living.

The proliferation of coding schools is a great example of entrepreneurs exploiting the current market need by executing a business strategy to focus on the needs of a 21st century economy. Much as technical schools train plumbers, welders and brick masons, these schools are in the business of training "digital brick masons" who are erecting our digital world.

While there will always be a need for traditional computer science programs that provide foundational knowledge, hacker academies are meeting the need for craftsmen capable of coding and producing apps and systems using prevailing open-source technologies so highly sought by companies today. Code schools provide either a complete alternative or a practical augmentation to traditional, more expensive four-year computer science programs.

Currently, the business models for code schools vary from venture-backed, private schools to non-profit and public models like the Charleston Digital Corridor's CODEcamp. Irrespective of the business model, it is important to keep in mind that coding schools are fulfilling an important need of making people immediately employable in high-wage positions.

It is also important to ensure that hacker programs live up to their representations and students receive the best quality of instruction. In this regard, regulation is so 20th century, but as I noted earlier, markets operate efficiently. There will be code schools recognized for graduating great talent, some will be acquired as a market consolidation is inevitable and others will fail. One fact remains – tech businesses are embracing this market-oriented delivery of technical talent. It is a value-oriented efficient model.