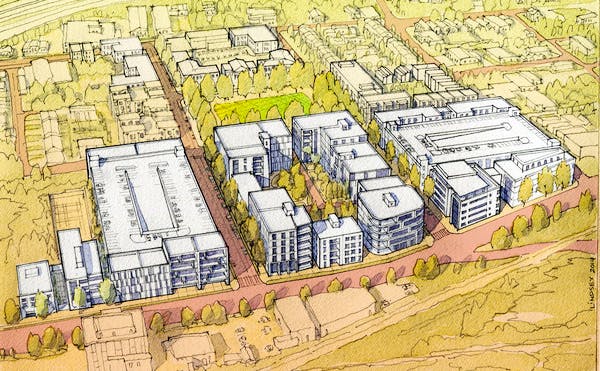 Ernest Andrade has a vision for Morrison Drive. He's not alone. Downtown Charleston's industrial stretch has become a kind of creative development darling, the focus of forward-thinking city planners and Charleston's only creative place-making organization, Enough Pie, which is looking to give the neglected area an artsy, community-driven makeover. However, for Andrade and his organization, Morrison Drive is the Gateway District, the future high-tech hub of the Holy City. The nexus of all of that activity: the future home of Flagship 3 at 999 Morrison Drive, the site of the old Charleston Blueprint Co.

Following in the highly successful footsteps of the Corridor's other two tech incubators, the Flagship and the Flagship 2, Flagship 3 will be 45,000-square foot facility designed to attract and support Charleston tech companies. While FS3 is currently in the planning stages, the project is expected to be completed in late 2015.

Today, the original Flagship office, which is located at Calhoun and East Bay Streets, houses furnished offices for start-ups with one to three employees, while FS2 has offices for slightly larger but still very young, companies consisting of up to 12 people. Compared to FS3, both are relatively small projects.

For one thing, Flagship 3 is being built from the ground up, unlike versions 1.0 and 2.0. "It's one thing to look at an existing facility and go renovate the building," Andrade says. "You're working within known constraints –- and with Flagship and FS2, there may have been some challenges dealing with those constraints, but at least they're known. But this is a brand-new building. There's a lot more consideration that goes into the structure itself."

That's true of any new construction, but it's an especially tricky thing when the building in question has to fit the needs of so many different end users, from newborns to ready-to-leave-the-nesters. In addition to offices and classrooms, FS3 will have a coffee shop, a roof deck, and some sort of athletic space or facility –- the specifics of that haven't yet been laid out.

Once Flagship 3 is completed, it'll be the kind of cutting-edge center you'd imagine in a place like California's Silicon Valley, not a mid-size city like Charleston. The planning, he says, has involved "basically looking and talking to folks that have been involved in successful facilities in Seattle and San Francisco. My conversations have been limited to folks on the West Coast ... Microsoft and Facebook are two of those facilities."

Added to this need for adaptability is the fact that FS3 is a public-private enterprise. The City of Charleston purchased 999 Morrison Drive, while the Corridor is spearheading the building's development. That partnership adds some additional complexities, like how the financing will work, to the project.

But Andrade, who is also the director of the City of Charleston's Office of Business Development, has no qualms about that. "A private developer might choose to focus just on their piece and move forward," he says. "This is truly a public-private piece, so we have to determine what's in the long-term best interest of Charleston."

With Charleston's tech economy continuing to develop –- according to Andrade, the tech sector has absorbed more office real estate in Charleston than any other industry –- there's little question that the city will grow into a tech district, even if it's not quite ready to support one right now. "[FS3] is a long-term proposition," he says, noting he envisions a densely packed urban office area. "It's much more attractive and smart if you work with the planning staff to create a kind of a vision for that area as a whole. That's the key."