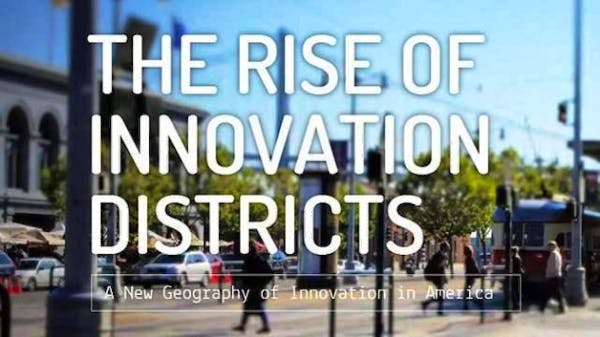 The Charleston Digital Corridor is one of a number of "innovation centers" in metro regions around the U.S. that promise to transform the American economy with jobs built around knowledge.

Where the centers are and what they could mean for an economy that's still sputtering in a majority of top metros is examined in the new Brookings report "The Rise of Innovation Districts." The Charleston Digital Corridor is not among the districts featured, but Brookings analyst Rachel Wagner said "there's no need for Charleston to be disappointed" because the public policy think tank wasn't presenting a "best" list –- just highlighting about 20 that got off to .

I sat down with Digital Corridor founder Ernest Andrade to get his take on how he saw his district comparing with the ones Brookings featured. We met in his office that is part of the Digital Corridor's complex for start-ups it seeds. Before its redevelopment, the building was the vacant, termite-infested and asbestos-laden space of a now-extinct TV station on East Bay Street just above Calhoun.Highlights of the interview:

Highlights of the interview:

What are the similarities and differences between the Digital Corridor and the districts cited by Brookings?

Size is one factor. Seventeen of the districts are in cities and the borough of Brooklyn that are many times bigger than Charleston, and some of them have received millions of dollars of public and private investment. One, the Cortex bioscience and technology research-to-commercialization district in St. Louis, has received $60 million in investment funding plus $15 million in tax credits. The Charleston Digital Corridor has incubated 76 high-tech start-ups since 2009 that have created over 500 high-wage jobs, and we've done this with just $625,000 in public investment in our two facilities. That's less than $1,500 per job, which is a bargain in the high-tech sector.

Some of the companies that have graduated from our Flagship & Flagship2 facilities include PeopleMatter, Good Done Great and Omatic Software, and the ones currently here include Phishlabs, ISI Technology and Netrist Solutions, all of which are experiencing great growth.

Brookings says the first requirement for success in an innovation district is a "collaborative leadership network from key institutions, firms and sectors who regularly and formally cooperate on the design, delivery, marketing and governance of the district." There also should be a lot of interaction between industry, research universities and government, Brookings says. Is that how the Digital Corridor evolved?

No, what we did was not as complex, and it didn't require a research university. It started with meetings in 2000. Local business leaders, tech entrepreneurs and Charleston's citizenry agreed on the primary goal of creating enough high-wage jobs to close the gap with the steadily rising cost of living.

This was unsustainable. Our economy was built around manufacturing, distribution and hospitality. But with the wage stagnation of this economy, everyone understood we had to do something. They didn't know exactly what, except that they wanted new businesses that were more "generative" and less "distributive." These businesses, through their products and services, would create new wealth for our economy.

While having a powerhouse computer science engineering research university could have accelerated our growth, not having one didn't stop us. More than 80% of Charleston's high-tech businesses were being formed by entrepreneurs who had moved to our community to take advantage of Charleston's livability, legendary lifestyle and existing talent pool. The local government's mantra for entrepreneurs who comprised the Digital Corridor was simple, "You focus on building great businesses, and we'll take care of the rest." There were no outside consultants. The Digital Corridor strategy was 100% community-sourced.

What's something the Digital Corridor's doing that's building the foundation for a knowledge economy?

We organized CODEcamp, where year-round classes in Web and mobile software technologies are taught to beginners and pros. We have had 500 students in just two years. You don't need a four-year institution to do this. We did it with professionals from member companies in the Digital Corridor. We recently received a $247,000 innovation grant from the state to expand CODEcamp. How many communities are doing something like this?

Brookings says an innovation district starts by setting a vision. How important was that with the Digital Corridor?

You start with a vision. It has to be internal. Preferably, it is not something that that is imposed on a community by an outside consultant. Then you have to execute on the vision, and constantly monitor the actions and make changes on the fly to optimize outcomes.

Brookings says innovation districts should include housing, retail, restaurants and other mixed uses, where people can "live, work and play." Where is the Digital Corridor in meeting those objectives?

Thankfully, what we have on the Charleston peninsula is the real deal –- urbanity, economic and demographic diversity and vibrance on par with great cities like New York, San Francisco and Boston, and a very human scale. It's part of what's been rated as the "Best City in the U.S."

What if a large company that's considering relocating to Charleston said it wants a lot of parking for its hundreds of employees. What can the Digital Corridor offer that business?

Peninsular Charleston makes up just about 6 square miles of a 100-square-mile city. We have the ability to scale up on the peninsula to suit the needs of larger companies and are doing this with redevelopment currently taking place. Then, we have Daniel Island – a part of the Charleston Digital Corridor's geography that is ideally suited for large companies. Already located there are two major, publicly traded, high-tech employers – Blackbaud and Benefitfocus.

Charleston has lots of competition with other communities that want to develop knowledge economies. How well is Charleston doing, based on comparative data?

There are two recent surveys that show Charleston's superior performance. First, is one from the Bay Area Economic Council on the West Coast, which ranks the Charleston region fifth nationally in high-tech job growth.

The second survey – from the Milken Institute –- shows Charleston is 11th nationally in overall job creation and sustainability.

The Digital Corner was born 12 years ago. Where are you today?

The first five years was to understand what we needed to do to create a high-wage economy. The next five years was demonstrating that we could do it and establish program sustainability. Now we're in the third five-year phase, where we are accelerating the growth of our still emerging technology industry.

Innovation districts are entrepreneurial, let's-do-it responses to huge dislocations throughout the U.S. economy.

Jobs remain below pre-recession levels in 61of the 100 largest U.S. metro areas, Brookings reports. The Washington, DC-based policy center also says poverty and near poverty in the largest metros have grown from 48 million in 2000 to 66 million – "due not only to the recession but broader trends around wage stagnation and economic restructuring."