The Innovation Myth - Why you can't engineer creativity with "innovation districts" 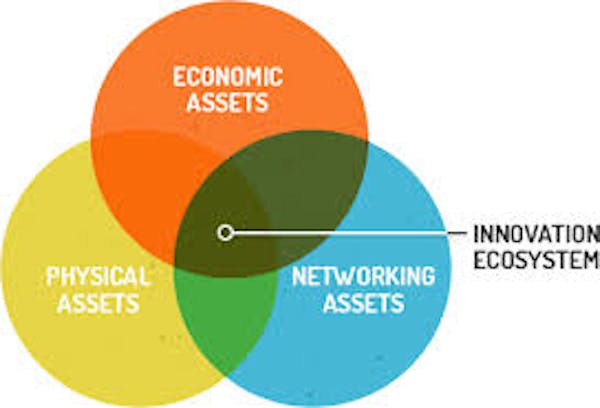 In the twenty-first century, the crucial element of a more-perfect society is innovation. Or so think tanks, urban planners**,** and entrepreneurs would have you believe. A recent report by the Brookings Institution confirms the dawn of "innovation districts," a new urban strategy designed to maximize collaboration and creativity with the promise of launching us into the future.

Innovation districts are cropping up across the globe–-from Seattle's South Lake Union to Boston's South Boston waterfront and Barcelona's 22@ neighborhood (a designation that replaced the traditional industrial designation, 22a, presumably to emphasize the new district's techy qualities). Dozens of cities across the United States, Europe, South America, and East Asia are cultivating local utopias of entrepreneurship. Some, in downtowns and midtowns of cities like Atlanta and Detroit, are anchored by universities and medical centers; others reimagine neglected industrial areas or transform traditional science parks, like the Research Triangle Park in Raleigh-Durham.

These districts represent a mash-up of research institutions, corporations, start-ups, and business incubators, intermixed with "innovative housing," neighborhood amenities, and cultural sites in a clean energy, Wi-Fi-enabled environment. They're also transit-accessible and located in rising or re-developed urban areas, reflecting a population that demands walkable communities and integrated lifestyles. No more isolated technology parks. No more suburban sprawl. Innovation districts aim to "create clusters of innovative people" (as Boston's website explains)–-all while combating inefficient land use and environmental degradation. Voltaire's Pangloss would approve: In innovation districts, all is for the best in the best of all possible worlds.

These twenty-first century idea-factories have the potential to revitalize neglected neighborhoods, deliver sustainable development, and encourage civic engagement according to their promoters; they might even repair the atomization of our modern, digitized lives. But is crowding a bunch of people into a few city blocks really the way to make creative sparks fly?

The philosophy behind the "innovation" district can be located within the office at large. Management professor Frederick Morgeson has found that almost all corporations now organize their workforce into teams, and 91 percent of high-level managers believe teams are key to success.

Our insistent faith in the wisdom of crowds and the sacred potential of collaboration has led, most recently, to the emergence of open office plans and co-working spaces. This trend has prominent supporters. Malcolm Gladwell claims, "Innovation–-the heart of the knowledge economy–-is fundamentally social." And organizational consultant Warren Bennis writes in Organizing Genius: The Secrets of Creative Collaboration, "None of us is as smart as all of us." Bennis's book announces the rise of "The Great Group" and "The End of the Great Man." This mode of thinking calls to mind the popular credo that locking people in a room to brainstorm or "hash it out" produces ingenuity the likes of which individuals can never achieve on their own.

But it is not that simple, as Susan Cain explains in her bestselling book, _Quiet: The Power of Introverts in a World that Can't Stop Talking. _The "New Groupthink," she writes, threatens to stifle productivity by elevating collaboration above all else. "It insists that creativity and intellectual achievement come from a gregarious place." Open-office plans–-which can be seen as a further extension of the "New Groupthink" and as a corollary development of the innovation-district movement–-are associated with high staff turnover, Cain notes. They also reduce productivity, increase blood pressure and stress levels, encourage hostility in the workplace, and reduce personal and confidential conversations. Most basically, excessive stimulation impedes innovation: Being interrupted is one of the biggest barriers to productivity. "We're so impressed by the power of online collaboration," Cain argues, "that we've come to overvalue all group work at the expense of solo thought." She turns to Apple, the company with perhaps the best innovation story of our age, to illustrate the power of working alone. Steve Wozniak didn't create the first PC in an open office space of boisterous teamwork and rapid-fire idea-sharing; he worked for months upon months in patient and productive solitude.

In his memoir, Wozniak offers this insight to aspiring innovators: "Most inventors and engineers I've met are like me–-they're shy and they live in their heads. They're almost like artists. In fact, the very best of them _are_artists. _And artists work best alone___where they can control an invention's design without a lot of other people designing it for marketing or some other committee. I don't believe anything really revolutionary has been invented by committee. If you're that rare engineer who's an inventor and also an artist ... Work alone. You're going to be best able to design revolutionary products and features if you're working on your own. Not on a committee. Not on a team."

Solitude is a catalyst to innovation in part because it allows people to push their individual performance and potential. In the early 2000s, research psychologist Anders Ericsson conducted a study to understand the key to exceptional achievement. Looking at performers in fields ranging from music to chess, he found that good and extraordinary achievers spent the same amount of time on their craft. The striking difference was that the exceptional performers spent significantly more time practicing and working on their own. This hardly seems surprising: Great thinkers and virtuosos have always prized their seclusion.

If personal space is vital for excellence, so is freedom from professional peer pressure. In 1963, Marvin Dunnette, a psychology professor at the University of Minnesota, conducted the first serious test of brainstorming. He gathered 48 research scientists and 48 advertising executives together to participate in both solitary and group brainstorming sessions. Contrary to popular thinking, group brainstorming produced significantly fewer ideas than solitary brainstorming. And the ideas it did produce were judged to be of lower quality. Countless studies since then have confirmed that creativity deteriorates as group size increases, but in many of our most important institutions, we continue to favor the group over the individual.

The jury is still out on the potential of innovation districts–-most are too new to draw any decisive conclusions–-but it's hard not to see these projects as our latest utopian vision of a perfect community that will save the economy. Jerold Kayden, a professor at Harvard's Graduate School of Design, observes that we're still operating mostly on intuition about what sorts of physical layouts promote innovation. "I think we all believe it," he told the Harvard Gazette. "We just need to do more to really demonstrate that this is true." Meanwhile, Edward Glaeser, author of Triumph of the City: How Our Greatest Invention Makes Us Richer, Smarter, Greener, Healthier, and Happier, insists that innovation districts are "merely a hypothesis ... not a proven strategy." (Also quoted in the Gazette.)

These bustling districts sound promising, but they ride on some pretty big assumptions–-that close proximity will necessarily lead people to share more across industries and sectors, and that collaboration offers the best chance for innovation. Happy collisions, sure. But an innovation explosion? Less likely.