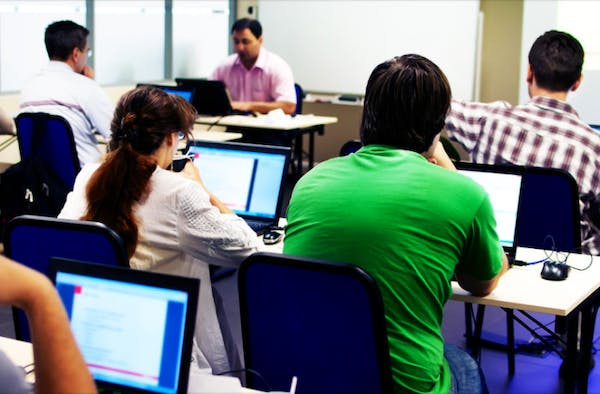 The meteoric rise of software coding boot camps over the past few years caught many people by surprise, including two College of Charleston researchers who recently won a federal grant to study why these programs are thriving and how their success might inform other computer science programs.

"A lot of people were naysayers and said these boot camps were all going to shut down within a year, but they have not," says Quinn Burke, assistant professor of teacher education and principal investigator for the research project.

Funded by an award of $179,000 from the National Science Foundation, the two-year project – Boot Camp or University Classroom? Preparing Women and Underrepresented Minorities for the Software Development Workforce – is a collaboration between the College and ETR Associates, a think tank based in Santa Cruz, California. Burke's research collaborator at the College is Jim Bowring, associate professor of computer science.

Among the questions they seek to answer are: What do boot camps offer that traditional two- and four-year degree programs do not? What type of person is attracted to these coding boot camps? And how does the tech industry, from startups to established companies, view the skills and preparedness of graduates from various types of programs?

Promoting a fast-track curriculum that churns out programmers in a matter of weeks, these highly intensive, for-profit boot camps are rapidly expanding across the country and overseas. One report identified more than 200 in the United States alone. The largest concentrations of boot camps are located in New York City and Silicon Valley, but they are also popping up in smaller markets like Charleston that are trying to establish high tech hubs and have a demand for more programmers. One of the country's largest coding boot camp companies is Iron Yard, which was formed in Greenville, South Carolina, in 2012 and now has more than 20 locations, including one in Charleston. Last year, Iron Yard opened its first international location in London.

While boot camps boast impressive job placement rates – over 90 percent in some cases – and high starting salaries for graduates, they also come with a steep price tag. "These graduates after 12 weeks are going out and making $65,000 to over $100,000 to start," says Burke. "The big catch is that most of these programs cost about $15,000 to $20,000 money up front to get in. A major research question is to what extent these graduates' skill sets are resilient. Knowing how to code in a language such as JavaScript is a boon to one's career opportunities, but to advance in the software development industry, graduates also need 'soft' skills such as teamwork . One of our research questions is to determine to what extent these skills are formally offered in coding boot camps."

Burke points out that an often-cited criticism of boot camps is their focus on teaching students only one specific computer language, such as Java, C# or Ruby on Rails. That narrow emphasis on what researchers refer to as routine expertise could put boot camp graduates at a disadvantage in the workforce if the companies they work for change direction and adopt a different computer language. Such arguments tend to support the traditional model of undergraduate education, which provides students with a broad-based education that imparts other less-tangible skills such as critical thinking, problem solving, and the ability to work in teams. Researchers refer to this model of learning as adaptive expertise.

Chair of CofC's department of computer science, Sebastian van Delden, makes such a point. "In a traditional four-year computing degree program, students learn the scientific and theoretical underpinnings of computer science and software engineering. It's not about learning a programming language. Anybody can speak English, but not anybody can compose poetry." The role of the liberal arts curricula, continues van Delden, is key here. "The liberals arts education that a student receives at The College is particularly relevant to the long-term success of contemporary software engineers whose scientific and technical skills must be complemented by excellent communication skills in order to effectively function in Scrum and other software development environments."

Burke says it would be a mistake to make conclusions about which model is best without a systematic investigation. The fact is, boot camps are gaining a foothold and attracting students willing to pay a premium for a streamlined education. In addition, boot camps have had better success at attracting women to their programs, which has not historically been the case in the male-dominated STEM fields, particularly CS.

For these and other reasons, it may behoove traditional computer science programs to evaluate boot camps and identify potential opportunities for collaboration, says Burke. "We're trying to make sure it's not an either or scenario. The goal is to determine the relative contributions and values of boot camps as well as four-year degree programs."

Some universities have already partnered with boot camps in an effort to provide students with more options. "There may be," say Bowring, "an opportunity to recognize boot-camp training and job experience, for that matter, with academic credits."

Another important component of the research will involve an analysis of industry staffing trends and needs. The researchers will work closely with tech companies in Charleston's Silicon Harbor as well as in California's Silicon Valley. The involvement of researchers from ETR Associates in California is expected to help bring a national perspective to the project. The collaborators from ETR are Lou Ann Lyon and Jill Denner, both of whom work closely with the computer science department of the University of California, Santa Cruz.

Armed with data from the companies who hire programmers, the research team hopes to learn which types and sizes of companies are more likely to hire boot camp-trained programmers versus computer science majors.

"My hypothesis is that some of the bigger companies would be more willing to take people out of the camps because they can provide the infrastructure and support once they get on the job," says Burke. "The smaller ones, the upstarts, may need someone who has a little more depth and can fill multiple roles–-these young companies may not have the resources to foster new hires for multiple months."

The Charleston Digital Corridor, a tech initiative that has fueled the growth of Charleston's tech economy, is also involved in the research project, and its executive director, Ernest Andrade '85, is serving as an advisor.

"Bootcamps aren't necessarily a replacement for a traditional four-year computer science degree – they are augmentative," says Andrade. "However, as Charleston's tech economy has soared, bootcamps have proven effective with providing students the skills that are currently in high demand and compensation levels well above per-capita wages."